WHAT YOU WILL DO WITH A MIDI FILE :

'Nothing Else Matters' is a song by American heavy metal band Metallica. It was released in 1992 as the third single from their self-titled fifth studio album, Metallica. The song peaked at number 11 on the BillboardMainstream Rock Tracks chart, number 6 on the UK Singles Chart, number 1 in Denmark, and reached the top ten on many other European charts. 'Nothing Else Matters' was featured as a playable track in the music video game Guitar Hero: Metallica. Recognized as one of Metallica's best known and most popular songs, the power ballad[1] has become a staple in live performances.

Lead singer and rhythm guitarist James Hetfield wrote the song (credited to Hetfield/Ulrich)[2] in 1990 while on tour, when Hetfield 'was bumming out about being away from home.' Initially, the song was not meant to be released, as Hetfield had written it for himself, but after drummer Lars Ulrich heard it, it was considered for the album.[3]

The song's demo was recorded in Ulrich's home studio The Dungeon on August 12, 1990.

Its intro is an E minor arpeggio (transposed one half-step lower on stage performances) beginning with the open low E followed by the open G, B and high E strings.

It is one of the few Metallica songs in which Hetfield plays the guitar solo. Guitarist Kirk Hammett does not play on the studio recording, making it one of the few in the whole Metallica repertoire, along with Cliff Burton's '(Anesthesia) Pulling Teeth', in which he does not appear.[4] Hammett stated he did not learn how to play the song until they were well into the tour for the album.

The orchestral arrangements were written by award-winning composer Michael Kamen, who would later go on to collaborate with the group on S&M.

The music video premiered on MTV on February 26, 1992.[citation needed] It was directed by Adam Dubin, and edited by Sean Fullan. The clip consists of parts of the A Year and a Half in the Life of Metallica documentary, which was shot during the recordings of Metallica.[citation needed] One of them shows Hetfield playing a Gibson EDS-1275 guitar during the second chorus. MTV will not air the video during daytime hours anymore because it features nudity in the form of pin-up posters and Playboy centerfolds that are taped up in the studio. It also has a picture of Winger's Kip Winger which Ulrich is seen throwing darts at. On the band's 2006 music video compilation DVD, the posters are censored, as was done with the nudity featured in the music videos for 'Turn the Page' and 'Whiskey in the Jar'.

The song has now become a staple in Metallica's live performances, and has been dedicated to their fans. When played live nowadays, Hammett does the first part of the intro, and Hetfield joins in for the second, to then sing and play it alone until after the first chorus, when the whole band kicks in. Also, the last verse is left out, ending the song with the heavily distorted guitar solo by Hetfield, and usually fading into 'Enter Sandman'. A live version in which this can be heard can be found on the CD/DVD Orgullo, Pasión y Gloria: Tres Noches en la Ciudad de México. Other live recordings can be found on Live Shit: Binge & Purge, on S&M, Cunning Stunts DVD, the DVD/Blu-rayThe Big 4 Live from Sofia, Bulgaria as well as on the soundtrack for the band's feature film Through the Never, and also featured on 2019 S&M follow-up live album, S&M2.

Nothing Else Matters Guitar Lesson

For its appearance on S&M, its orchestration was arranged by Michael Kamen conducting the San Francisco Symphony Orchestra. This live version is featured on the album S&M. It was also released as the single 'Nothing Else Matters '99', which included the b-sides '-Human', and the S&M version of 'For Whom the Bell Tolls', on November 22, 1999.[47] This version was also played with guitars tuned to E♭. 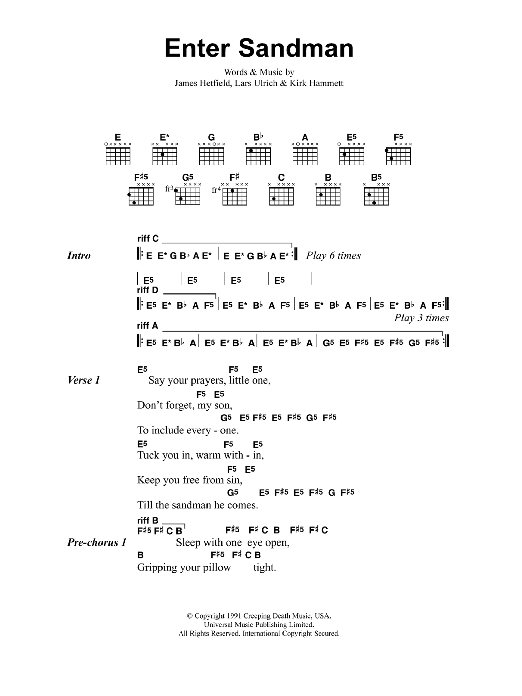 There is also an acoustic remix of 'Nothing Else Matters' that is called 'Elevator Version', with no electric guitars (replaced by acoustic guitars, even for the solo), Kamen's orchestrations, and Hetfield's voice only; it appears as the B-side to 'Sad but True'.

An instrumental version of 'Nothing Else Matters' appears on the soundtrack of the 2021 film Jungle Cruise. The band collaborated with the film's composer James Newton Howard to record a new orchestral arrangement of the song for the film.[60][61]

'Nothing Else Matters' is a special Europe-only single by British singer-songwriter Lucie Silvas. It was released in exactly the same way as 'Don't Look Back', with the same B-sides and artwork.

Metallica Nothing Else Matters Audio

Gregorian is a German band headed by Frank Peterson that performs Gregorian chant-inspired versions of modern pop and rock songs. In 1999, they recovered their version to be included on their album Masters of Chant.[63]

On January 7, 2021, it was announced that Miley Cyrus would be releasing a cover version that would feature Elton John on piano, drummer Chad Smith from Red Hot Chili Peppers, current Metallica bassist Robert Trujillo and cellistYo-Yo Ma. Cyrus also announced in October 2020 that she plans to release a full album of Metallica covers. Cyrus previously covered 'Nothing Else Matters' during her 2019 set at Glastonbury.[65] The cover, produced by Andrew Watt, was released on June 22, 2021, as a promotional single from Metallica's tribute album The Metallica Blacklist, released on September 10. The video for this version was uploaded the same day on Cyrus' YouTube channel.[66] The cover is also featured on John's album The Lockdown Sessions, which released on October 22.

Metallica Nothing Else Matters Acoustic